Probabilistic topic modelling is an improbable gift from the field of machine learning to the social sciences and humanities. Just as social scientists began to confront the avalanche of textual data erupting from the internet, and historians and literary scholars started to wonder what they might do with newly digitised archives of books and newspapers, data scientists unveiled a family of algorithms that could distil huge collections of texts into insightful lists of words, each indexed precisely back to the individual texts, all in less time than it takes to write a job ad for a research assistant. Since David Blei and colleagues published their seminal paper on latent Dirichlet allocation (the most basic and still the most widely used topic modelling technique) in 2003, topic models have been put to use in the analysis of everything from news and social media through to political speeches and 19th century fiction.

Grateful for receiving such a thoughtful gift from a field that had previously expressed little interest or affection, social scientists have returned the favour by uncovering all the ways in which machine learning algorithms can reproduce and reinforce existing biases and inequalities in social systems. While these two fields have remained on speaking terms, it’s fair to say that their relationships status is complicated.

Even topic models turned out to be as much a Pandora’s Box as a silver bullet for social scientists hoping to tame Big Text. In helping to solve one problem, topic models created another. This problem, in a word, is choice. Rather than providing a single, authoritative way in which to interpret and code a given textual dataset, topic models present the user with a landscape of possibilities from which to choose. This landscape is defined in part by the model parameters that the user must set. As well as the number of topics to include in the model, these parameters include values that reflect prior assumptions about how documents and topics are composed (these parameters are known as alpha and beta in LDA). 1 Each unique combination of these parameters will result in a different (even if subtly different) set of topics, which in turn could lead to different analytical pathways and conclusions. To make matters worse, merely varying the ‘random seed’ value that initiates a topic modelling algorithm can lead to substantively different results.

Far from narrowing down the number of possible schemas with which to code and analyse a text, topic models can therefore present the user with a bewildering array of possibilities from which to choose. Rather than lending a stamp of authority or objectivity to a textual analysis, topic models leave social scientists in the familiar position of having to justify the selection of one model of reality over another. But whereas a social scientist would ordinarily be able to explain in detail the logic and assumptions that led them to choose their analytical framework, the average user of a topic model will have only a vague understanding of how their model came into being. Even if the mathematics of topics models are well understood by their creators, topic models will always remain something of a ‘black box’ to many end-users.

This state of affairs is incompatible with any research setting that demands a high degree of rigour, transparency and repeatability in textual analyses. 2 If social scientists are to use topic models in such settings, they need some way to justify their selection of one possible classification scheme over the many others that a topic modelling algorithm could produce, 3 and to account for the analytical opportunities foregone in doing so.

If you’ve ever tried to interpret even a single set of topic model outputs, you’ll know that this is a big ask. Each run of a topic modelling algorithm produces maybe dozens of topics (the exact number is set by the user), each of which in turn consists of dozens (or maybe even hundreds) of relevant words whose collective interpretation constitutes the ‘meaning’ of the topic. Some topics present an obvious interpretation. Some can be interpreted only with the benefit of domain expertise, cross-referencing with original texts, and perhaps even some creative licence. Some topics are distinct in their meaning, while others overlap with each other, or vary only in subtle or mysterious ways. Some topics are just junk.

If making sense of a single topic model 4 is a complex task, comparing one model with another is doubly so. Comparing many models at a time is positively Herculean. How, then, is anyone supposed to compare and evaluate dozens of candidate models sampled from all over the configuration space? END_OF_DOCUMENT_TOKEN_TO_BE_REPLACED

Your thesis has been deposited.

Is this how four years of toil was supposed to end? Not with a bang, but with a weird sentence from my university’s electronic submission system? In any case, this confirmation message gave me a chuckle and taught me one new thing that could be done to a thesis. A PhD is full of surprises, right till the end.

But to speak of the end could be premature, because more than two months after submission, one thing that my thesis hasn’t been yet is examined. Or if it has been, the examination reports are yet to be deposited back into the collective consciousness of my grad school.

The lack of any news about my thesis is hardly keeping me up at night, but it does make what I am about to do in this post a little awkward. Following Socrates, some people would argue that an unexamined thesis is not worth reliving. At the very least, Socrates might have cautioned against saying too much about a PhD experience that might not yet be over. Well, too bad: I’m throwing that caution to the wind, because what follows is a detailed retrospective of my PhD candidature.

Before anyone starts salivating at the prospect of reading sordid details about about existential crises, cruel supervisors or laboratory disasters, let me be clear that what follows is not a psychodrama or a cautionary tale. Rather, I plan to retrace the scholastic journey that I took through my PhD candidature, primarily by examining what I read, and when.

I know, I know: that sounds really boring. But bear with me, because this post is anything but a literature review. This is a data-driven, animated-GIF-laden, deep-dive into the PhD Experience. END_OF_DOCUMENT_TOKEN_TO_BE_REPLACED 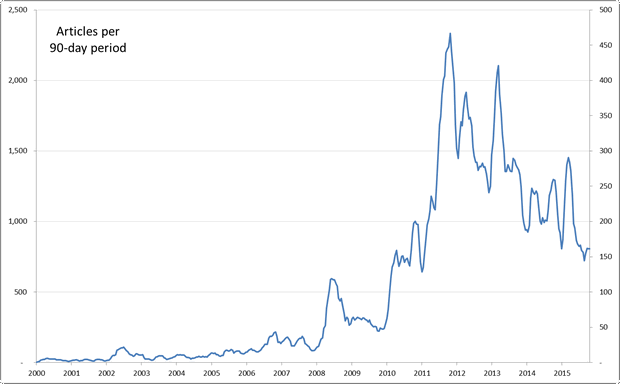 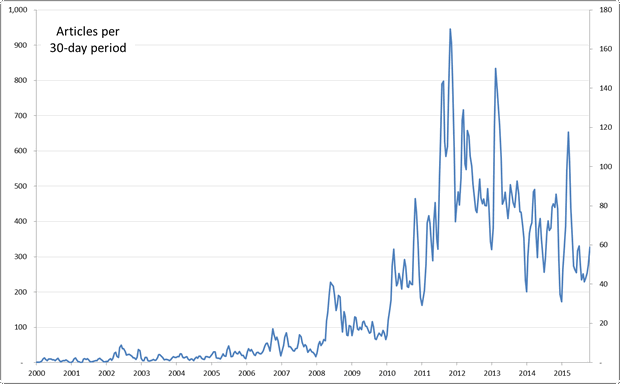 Figure 1. The number of articles in my corpus over time, aggregated to a 30-day moving window. Hovering over the image shows the same data aggregated to a 90-day window. END_OF_DOCUMENT_TOKEN_TO_BE_REPLACED

When was the last time you read a newspaper? I mean an actual, physical newspaper? Can you look at your fingertips and picture them smudged with ink, or remember trying to turn and fold those large and unwieldy pages? These are fading memories for me, and are probably totally foreign to many younger people today. Like many people, I consume virtually all of my news these days via the internet or, on rare occasion, the television. As far as I am concerned, newspapers are fast becoming nothing more than historical artifacts.

And yet, newspaper articles account for the bulk of the news data that I am analysing in my PhD project. To be sure, most of these newspaper articles were also published online, and would have been consumed that way by a lot of people. But I feel I can’t ignore the fact that these articles were also produced and consumed in a physical format. Unfortunately, there’s not much I can do to account for the physical presentation of the articles. My database doesn’t include the accompanying images or captions. Nor does it record how the articles were laid out on the page, or what other content surrounded them. But the metadata provided by Factiva does include one piece of information about each article’s physical manifestation: the page number of the newspaper in which it appeared.

From the very beginning of the explorations documented on this blog, I have completely ignored the page number field in my dataset. I figured that I was analysing text, not newspapers, and in any case I couldn’t see how I would incorporate page numbers into the kind of analysis that I was planning to do. But after hearing a colleague remark that ‘article-counting studies’ like mine are often unsatisfactory precisely because they fail to account for this information, I decided to give it some more thought. END_OF_DOCUMENT_TOKEN_TO_BE_REPLACED