Depending on which weather station you follow, Melbourne is currently on track to experience eight consecutive days with maximum temperatures of at least 30 degrees Celsius. At the Olympic Park station, every day since Thursday 20 January has been over 30°C except for Friday the 21st, which was 29.6°C. At Essendon Airport, where temperatures have been about a degree hotter, Friday saw a maximum of 31.9°C. The temperature in Melbourne as I write this is already over 33°C, and the forecast for tomorrow is 34°C. If Friday’s forecast of 30°C comes to pass, then that would bring the stretch to nine days.

I came to Melbourne from Brisbane exactly three years ago, and I don’t recall experiencing a period of continuous heat like this since then. There have been some savagely hot days to be sure, but most of them have concluded with a dramatic cool change, and been followed by a comfortable day in the mid 20s — hence the prevailing yo-yo pattern in the graph above. Every one of these cool changes has made me feel better about my decision to desert Brisbane’s subtropical climate for Melbourne’s erratic weather. A week of 30+ temperatures is what I would expect to endure in Brisbane, and is exactly what I came to Melbourne to avoid.

How historically rare is this current succession of hot days in Melbourne? To find out, I dusted off an analytical tool that I created a couple of years ago to better understand the climatic trends in Brisbane and Melbourne. Called the HeatTraKR, the tool is a workflow for the KNIME Analytics Platform that crunches data from the Bureau of Meteorology to produce a variety of outputs. One of the questions that I created the tool to answer was whether long stretches of hot days were becoming more frequent in Brisbane (the answer was a tentative maybe). So the tool is perfectly equipped to answer my present question about Melbourne’s heatwave.

The chart below, generated by the HeatTraKR, shows the longest period of successive days over 30°C in Melbourne in each year between 1910 and May 2019 (for some reason, BoM’s long-range temperature dataset doesn’t seem to extend any further). Tallying these numbers reveals that on average, there are stretches of five or more successive 30+ days in one out of every three years. Or in other words, in two thirds of the years since 1910, there have been no more than four successive 30+°C days. 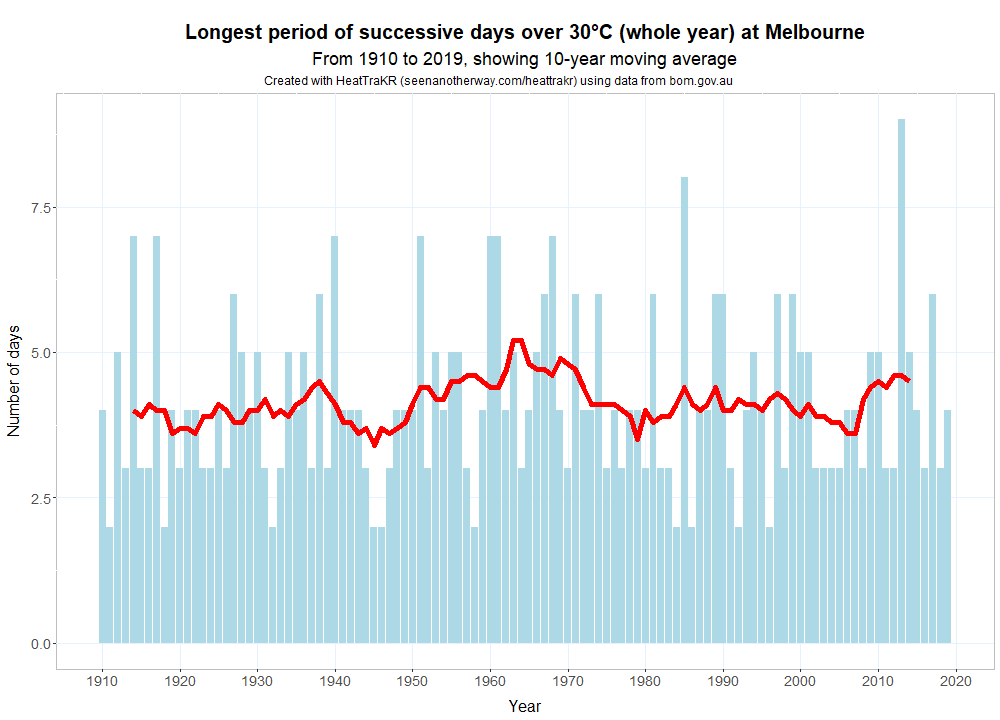 The longest period of successive days over 30 degrees in Melbourne each year from 1910 to 2019.But the numbers thin out very quickly when you look at stretches of five days or longer. Melbourne has experienced a solid week — that is, seven consecutive days — of 30+°C maximums just nine times since 1910, a little less than once per decade. A period of eight days over 30 degrees (which we are currently on track to see) has only happened twice, specifically in March 1985 and March 2013. The stretch in 2013 lasted nine days, which is the only time since 1910 that this has happened.

So, whichever way you look at it, the prolonged heat that Melbourne is currently experiencing is a rare event. Unless tomorrow’s forecast is way off (and accepting my perhaps cheeky inclusion of last Friday’s maximum of 29.6°C), tomorrow will mark only the third time in the last century that the city has endured eight successive days with maximum temperatures in the 30s.

(If you think I am too cheeky counting last Friday’s 29.6°C as among the days over 30°C … you’re probably right. So I checked the numbers using that threshold instead of 30.0°C. There are in fact two additional years (1951 and 1961) with periods of eight days over this threshold, giving a total of four years since 1910. There are still only nine years in which maximum have been at or above this temperature for seven successive days.)